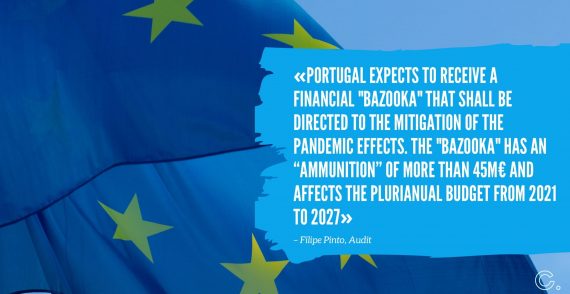 The “Bazooka” and the Recovery and Resilience Plan

Portugal has come to stand out as one of the most cautious countries, with regard to measures to combat the economic problems caused by the pandemic.

Despite having placed large-scale support on the ground, such as the Simplified Lay-off, the credit lines for the activities most affected by the pandemic and confinement, the new social benefits and, even a greater investment in the National Healthcare Service, Portugal stands out for being the most prudent country when compared to the rest of Europe.

Data revealed by the OECD showed that in a group of 40 evaluated economies, Portugal was the second country that registered the greatest economic damage between the beginning and the end of the year 2020. Pointing to a fall in the economy, in 2020, of about 8,4 % and only 1,7% growth in 2021.

The European Commission manages to be even more pessimistic than the OECD, placing Portugal in the group of countries that will take the longest to recover its normal level of wealth production, considering, therefore, that the Portuguese economy will be one of the most affected by the pandemic, since the country is extremely dependent on the sectors most affected by the measures to combat the pandemic: tourism and restaurants.

However, Portugal is expecting to receive a financial “bazooka” that intends to target to combat the mitigation of post-pandemic effects. This “bazooka” had an “ammunition” of more than 45 billion euros (30 billion euros from the EU budget and 15,3 billion in grants), which combines the pluriannual budget from 2021 to 2027.

In this context, Portugal developed a Recovery and Resilience Plan (RRP) that is based on three main aspects: Resilience, Climate Transition and Digital Transition.

In terms of Resilience, the intention is to stimulate the economy and face the effects of the exogenous shock caused by the pandemic and prepare the country for further future shocks. For this, it is necessary to formulate and direct measures for the reduction of social vulnerabilities (National Healthcare System, Social Housing, etc.), the strengthening of the national productive sector (Investment and Innovation), the retention and creation of jobs (Qualifications and Skills) and ensure a competitive and cohesive territory (Infrastructure, Forest and Water Management). As such, these are the key pillars in terms of Resilience:

The Climate Transition aspect is also unavoidable, since climate change is factual and indisputable. It is necessary to respond to these changes and mitigate the effects that pollution, in general, has caused. The RRP is based, therefore, on measures that provide a reduction in greenhouse gas (GHG) emissions, focusing on a strategy of sustainable mobility, decarbonization of the industry, betting on the bioeconomy and renewable energies.

The third and last aspect is based on Digital Transition, in an era in which we are witnessing an exponential digitalization of society and the economy. The pandemic itself provided greater digitalization, forcing companies to operate remotely and via the internet and families to relate via digital media, given the restrictions on social relationships. In this context, it is necessary to equip Portugal with greater digital training and accelerate, even more, the transition to a more digitalized economy and society, focusing its performance on the digitalization of schools, companies and public administration.

In short, the year 2021 is expected to be the turning point for a period of recovery, but given the context of uncertainty in which we live, with negative effects on the contraction of demand and supply, in its various components, the path economic growth and employment can be called into question.
Anterior
Seguinte
Este site utiliza cookies para uma melhor experiência do utilizador. Ao navegar no site estará a consentir a sua utilização.EntendiPolítica de Privacidade